Obviously since I was lucky enough to preface this post with that warning, it means nothing really great is happening.

I got a text from one of the weekend girls at 645 am this past Saturday that said “I just got here and opened his stall door and this is what his knee looked like…” attached was this amazing picture:

Since it was 645 and I was precoffee, I didn’t fully comprehend WHO the owner of said knee was. On closer inspection I knew the answer to my “who is that?!” response was going to be Eli.

As a barn manager, I’m always a little conflicted when it’s my horse that gets hurt. I’m always thrilled I don’t have to make THAT call to any of my clients at 645 on a Saturday morning; however it’s my horse so that sucks.

I threw clothes on, and immediately headed out to the barn where he was standing in then wash rack with the hose on it. This horse puffs up worse than me after a Chinese food binge, and in the hour between when I got the text and when I arrived at the farm, it was a disaster.

We immediately got the area cleaned up (thank you, Ashley!) and in my assessment of the situation, it wasn’t a stitchable area (because flex points and swelling). A quick text to our AMAZING vet confirmed that, so we dried the leg, wrapped him up, and threw SMZ’s in his breakfast.

Shockingly he was really, really good with all the chaos. His leg, obviously, hurt like a son of a bitch but he didn’t put up a fight as we were fussing with it. 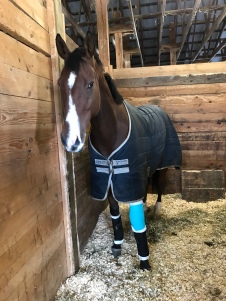 The vet peeked at it on Monday morning as I was changing the wrap and confirmed it looked good (her “good” and my “good” are clearly two different terms) and we have our marching orders…twice daily hand walks, temp checks, and every other day bandage changes. 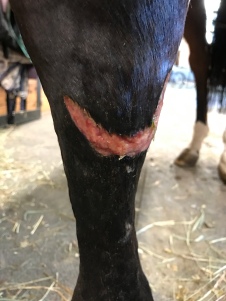 It looks like it’s going to be a slow healing process, about three months, but I’ve been trying to spin the whole situation in a positive light and am thankful that we’re going into winter, so the downtime was planned anyways…it’s just a little earlier than scheduled.

As for how it happened… nobody really knows. He was stalled all night so my only assumption is that he got himself cast and possibly caught himself on the box in the back of his stall in his flailing. (You can see it in the picture above)

While I’m obviously super bummed, I’m also really happy that it wasn’t worse. It was caught quickly, handled perfectly, and the joint wasn’t affected at all. We’ve moved him to a stall with padded walls (seriously) and he has a next door neighbor who is also on stall rest. He’s got toys, a stuffed hay net, and a mom who shamelessly dotes on him.

He’s also getting three or four times weekly Magnawave sessions from his favorite Auntie Steph to not only speed up the healing time on the wound but also help keep his body loose and preserve some of the muscle we’ve worked really hard to build.

It will (hopefully) be alright and we’ll be back bouncing off arena walls and terrorizing the pony children in a few months. I don’t even care if he has an ugly knee…just gives me an excuse to never sell him.